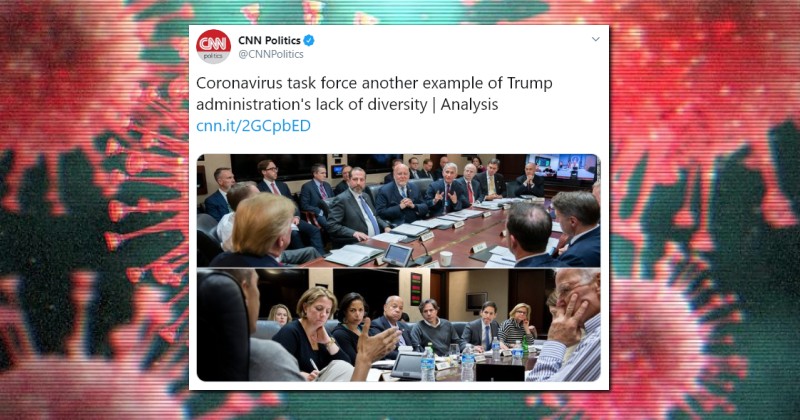 Paul Watson | Summit News – According to CNN, the real concern about the coronavirus is not the potential for a global pandemic, it’s the fact there are too many white people trying to stop it.

That was the message sent by an article posted on the news network’s website entitled ‘Coronavirus task force another example of Trump administration’s lack of diversity’.

“Who are these experts?” whined CNN’s Brandon Tensley. “They’re largely the same sorts of white men (and a couple women on the sidelines) who’ve dominated the Trump administration from the very beginning.”

Tensley called the image, “a statement that’s as predictable as it is infuriating: President Donald Trump’s administration lacks diversity.”

He concludes by complaining about how “Trump values the opinions of: mostly white men who are mirror images of the President himself.”

Apparently, wanting to not appear racist is more important than stopping a rapidly spreading global pandemic which has now reached at least 23 countries.

This is yet another example of how “diversity” just means ‘less white people’. At its heart is the flagrantly racist premise that people should not be judged on the content of their character but on the color of their skin and that people with white skin should be discriminated against.

“When I lay dying of bat soup fever, I want to be able to say that the task force may not have been the most qualified, but goddamn they were a diverse bunch,” joked Carpe Donktum.

“Maybe, when the goal is to protect the country against a deadly virus, there are more important things than the race and genitals of the people in the room,” remarked Garrett Gutierrez.

“I completely agree with you. A solution to any epidemic requires the input of non-binary people of color. Diversity of gender expression and of skin color is the only way to crack major epidemiological challenges,” commented Professor Gad Saad.

I completely agree with you. A solution to any epidemic requires the input of non-binary people of color. Diversity of gender expression and of skin color is the only way to crack major epidemiological challenges.

And that in a nutshell is why CNN is a complete joke.