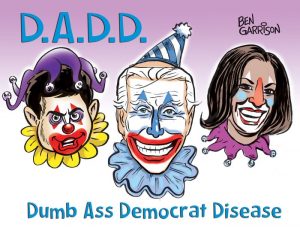 Democrat, The Fake News is playing Jedi Mind Control on you weaklings! All you have to do is ask the LORD to Break the SPELL that the Communist Democrats have cast on you! He will Break the Chains of Mental Bondage, YOU WILL SEE THE TRUTH and that TRUTH WILL SET YOU FREE! John 8:32 and Galatians 4:16

Democrats didn’t care when Madonna said she had thought an awful lot about blowing up the White House.

Democrats didn’t care when a Broadway Play depicted the assassination of President Trump.

Democrats didn’t care when Johnny Depp said, “how long has been since an actor assassinated a President”.

Democrats didn’t care when dozens of people were shot to death at a Jason Aldean concert.

Democrats didn’t care when Congressman Steve Scalise was shot at a baseball game.

Democrats didn’t care when Republican candidate Rudy Peters was attacked by a man with a switchblade.

Democrats didn’t care when a Republican Party Office was set on fire.

Democrats didn’t care when Maxine Waters said “you get up in their face at the mall, in restaurants, at gas stations and you tell them Republicans they’re not welcomed anywhere”.

Democrats didn’t care when Trump adviser Stephen Miller’s life was threatened and he was chased out of a restaurant.

Democrats didn’t care when Attorney General Pam Bondi was harassed and chased out of a theater.

Democrats didn’t care when Rand Paul was attacked and beaten up in his own yard.

Democrats didn’t care when two Republican senators: Rob Portman of Ohio and John Boozman of Arkansas were harassed in their own yards and on their own doorsteps.

Democrats didn’t care when a 71-year-old female staffer for California Rep. Dana Rohrbacher was knocked unconscious by an angry group of liberal protesters.

Democrats didn’t care when a North Carolina GOP office was firebombed by an angry mob of liberals.

Democrats didn’t care when Hillary Clinton said “we can’t be civil to Republicans until Democrats return to power”.

For over four plus years Democrats have encouraged hate, harassment, vandalism, acts of violence and even threats of assassination.

And now all of the sudden they are concerned about riots, and claim President Trump incited the Capitol Hill siege. It was their own people, Antifa and Black Op Terrorists who started it. Now the Bastards impeach the Greatest President in History, again, because HE EXPOSED them for the Traitors they are!!

Democrats ARE Enemies of God, America and the whole World for that matter! The DNC Cesspool is full of Liars, Perverts, Hoaxers, Race baiters and Fake News purveyors! YOU are Communist/Socialist Trash, and should be treated as such, until YOU repent, turn from YOUR wicked ways and become Born Again!

Mark 6:11 “And whosoever shall not receive you, nor hear you, when ye depart thence, shake off the dust under your feet for a testimony against them. Verily I say unto you, It shall be more tolerable for Sodom and Gomorrha in the day of judgment, than for that city.”

What we are seeing for the last 4+ years is a Spiritual Battle that has Manifested here in the Psychical world. Demons are Manifesting in the Communist Democrats like never before in history. You can’t defeat them in the flesh, They MUST be dealt with through Warfare Prayer.