2nd Timothy 3:6-7 “For of this sort are they which creep into houses, and lead captive silly women laden with sins, led away with divers lusts, 7 Ever learning, and never able to come to the knowledge of the truth.“

For this article excerpt, her love for Communism and Antifa, I have awarded her the Prestigious Epitome of an Ass Clown Award

Seattle Mayor Jenny Durkan has come out explicitly in favor of the far-left Capitol Hill Autonomous Zone (CHAZ), rebuking President Donald Trump for coming out against the lawless collective.

“Lawfully gathering and expressing first amendment rights, demanding we do better as a society and provide true equity for communities of color is not terrorism – it is patriotism,” Durkan wrote in a tweet.

“The Capitol Hill Autonomous Zone #CHAZ is not a lawless wasteland of anarchist insurrection – it is a peaceful expression of our community’s collective grief and their desire to build a better world. Given his track record, it’s not hard to believe that Trump is wrong, yet again,” she wrote in a subsequent Tweet.

She continued on for many more tweets, making every excuse she could muster for the lawless anarchistic protesters who have seized several blocks of the city and defaced the abandoned police station located therein. Read more at Big League Politics

Proverbs 30:20 “Such is the way of an adulterous woman; she eateth, and wipeth her mouth, and saith, I have done no wickedness” 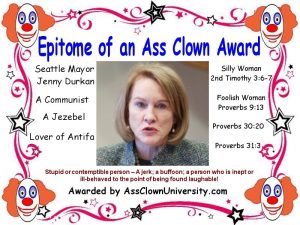