Why none other than Bill “Slick Willie” Clinton! 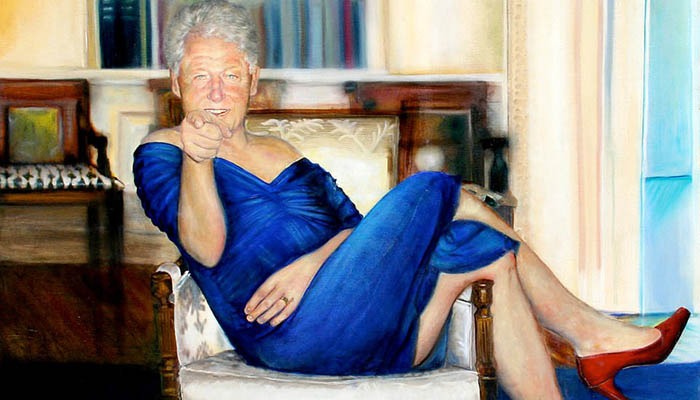 Painted by artist Petrina Ryan-Kleid, “Parsing Bill”. Watch out Petrina, you may be Arkancided!

Pray for this woman and the victims so the #ClintonBodyCount does not rise anymore! H/T to Ben Garrison for posting the song lyrics. I had forgotten about the song!

Washington Examiner – The artist who painted the portrait of former President Bill Clinton wearing a blue dress told the Washington Examiner that it was a “complete surprise” to learn that Jeffrey Epstein, the alleged child sex trafficker, had her work hanging in his Manhattan home.

Petrina Ryan-Kleid, an Australian artist living in New York City, said, “When the [New York Academy of Art] put on a fundraiser at the Tribeca Ball that year, they sold my painting to one of the attendees. I had no idea who the buyer was at the time.”

The existence of the oil-on-canvas painting, dubbed “Parsing Bill”, depicts the former president sitting seductively in an Oval Office chair, wearing red heels and a blue dress reminiscent of the one he soiled during his affair with Monica Lewinsky.

Ryan-Kleid said she had been a graduate student at the New York Academy of Art in 2012, where she painted pictures of Presidents Bill Clinton and George W. Bush as part of her master’s thesis.

“As with most of my paintings, I had completely lost track of this piece when it was sold seven years ago,” Ryan-Kleid continued. “So it was a complete surprise to me to learn yesterday that it wound up in Epstein’s home.”

Epstein put out a press release in December 2012 claiming his charitable foundation had given “crucial funding” to the New York Academy of Art.

“It was hanging up there prominently — as soon as you walked in — in a room to the right,” said one source who had seen the bizarre painting, according to the New York Post. “Everybody who saw it laughed and smirked.”

Read more at the Washington Examiner