Republican Dan Bishop is running ads in the North Carolina special election where he accuses liberal socialist Democrats of being “clowns.” 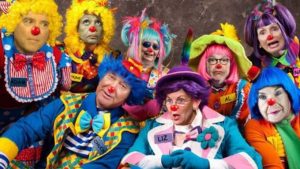 The Democratic candidate for next month’s North Carolina House special election shared an article Monday accusing his opponent of using “clown” as an anti-Semitic dog whistle based on an obscure alt-right meme.

North Carolina’s 9th Congressional District is currently vacant after ballot fraud by supporters of Republican Mark Harris led the state election board not to certify the results of the 2018 election. Harris subsequently lost to state representative Dan Bishop in the GOP primary, while Democrat Dan McCready won the Democratic primary unopposed.

Along those lines, Bishop also tweeted several times about Democratic “clowns” after the ad’s release. The left-wing Daily Kos did not care for that rhetoric, with staffer David Nir writing a piece headlined, “North Carolina Republican’s response to shootings: Embrace ‘clown’ slur pushed by white supremacists.”

The clown line, Nir wrote, was “not just a particularly lame joke. It turns out there’s a disturbing genesis. Jared Holt, one of the tireless folks at Right Wing Watch, reported in April that white supremacists have begun adopting a version of the infamous far-right ‘Pepe the Frog’ meme decked out in clown garb that they call ‘Honkler,’ to symbolize ‘their exasperation over an imagined state of collapse in the Western hemisphere that they largely blame on immigrants and minority groups.'”

“Whether or not Bishop understands the significance of his ‘clown’ slurs, the propagation of this meme from the cesspools of the internet directly to the highest levels of Republican power shows just how in thrall to the far-right today’s GOP is,” he argued.

McCready evidently agreed with the article’s premise, tweeting “My God, we are better than this.”