Is George Conway A Husband From Hell? 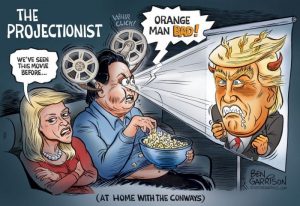 George is either jealous of his talented wife’s success or suffering from “small hand syndrome”.

The President and George were recently involved in a little twitter spat when Conway repeatedly accused the President of mental illness. He claimed in an interview with Rolling Stone that:

“The tweeting is just the way to get it out of the way, so I can get it off my chest and move on with my life that day. That’s basically it,” he said. “Frankly, it’s so I don’t end up screaming at her about it.”

Hey doughnut boy, what about supporting your wife’s career instead of yapping at President Trump’s heels like an overweight pug? Respect your wife’s choices and criticize the President in private instead of waving your little hands in public.

It’s embarrassing and you come off as an unsupportive husband suffering from Trump Derangement Syndrome. That is all.   Ben Garrison

It is no longer a Syndrome. It has morphed into a full blown Disease and brain dead people are the most susceptible!