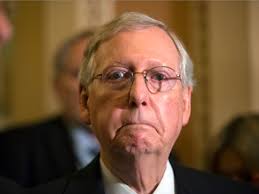 Right now, leaders of Tea Party holdover groups are calling on Senate Majority Leader Mitch McConnell to step down from his position. The conservative groups are all saying that Sen. McConnell, from Kentucky as well as the rest of his enablers should all go take a hike.

The leader of the Senate Conservatives Fund is former attorney general of the state of Virginia Ken Cuccinelli. Speaking at a press conference, Cuccinelli said that all five GOP leadership members must step down, and if that won’t happen, urged their caucus “to remove them as soon as possible.”

The press conference, which took place on Capitol Hill also included FreedomWorks, the Tea Party Patriots and For America. The president of For America, David Bozell said that if the Republicans were a football team, “you’d start seriously considering firing the coaches.” Groups that were involved with the Tea Party have been a longstanding problem for establishment Republicans.

More will be added