She outta not worry about surviving the Presidency of Trump. She needs to be worried about the Wrath of God that awaits her! 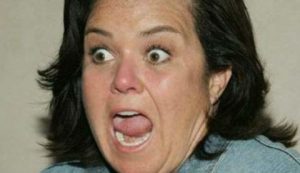 Fox News, an Ass Clown Media Outlet – Rosie O’Donnell said her “entire essence and beliefs” were shaken to the core after Trump was elected president in her first interview since the election.

The longtime Trump critic told W Magazine she was in “severe shock” when Trump won and went through “a lot of therapy.”

“I was in pure unadulterated [shock], as if I had fallen through the ice on a lake; I was underneath the water, and I couldn’t even see the surface,” O’Donnell told the mag. “It was a severe shock to my entire essence and my beliefs in the order in the world, and also the PTSD of having been an abused kid in a family.”

The 55-year-old said she was in “pure panic mode” the week following the election but is now just “devastated, disappointed, disheartened, and depressed by the reality of it.”