Well I am so glad that Climatologist Dr. Joy is on the case and is advising the country with her expertise in the many fields she is aptly qualified to opine on! I sleep really good at night knowing these Jezebel’s are on the job!

I am sure that she had intense discussions with the other PHd’s that grace the airwaves with her, as they educate Lunatics in their audience! 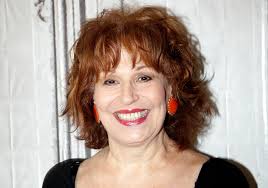 News Punch – The View co-host Joy Behar has already started making excuses for Joe Biden, saying it will be hard for him to “cure cancer”, as he promised, “when there’s so much climate change.”

And you guessed it — according to Joy Behar, it’s Trump’s fault that Biden will find it so difficult to fulfill his campaign promise.

She continued, “He already had a big initiative that he helped government for brain cancer. This should be at the forefront. I don’t know why curing cancer hasn’t been.”

Behar said, “To that statement, I would say that curing cancer is going to be much more difficult when there’s so much climate change and pollutants in the environment. Because a lot of cancer is environmentally caused. This president rolls back anything that will clean the air. They’re working against each other if they don’t also clean up the omissions.”