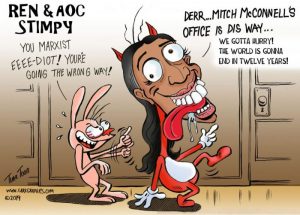 Rep. Alexandria Ocasio-Cortez (D-NY) declared that she would never apologize for comparing detention facilities at the U.S. border with “concentration camps” in Nazi-occupied Europe.

Ocasio-Cortez made the comparison on a live Instagram video stream on Monday night: “That is exactly what they are. They are concentration camps,” she said, adding that the phrase “never again” — popularly associated with the memory of the Holocaust — “means something.”

By then, even CNN had enough. John Avlon — no friend of President Donald Trump — said that Ocasio-Cortez had gone “across the line,” adding: “It’s not that hard to apologize. she should do it. It’s unacceptable.”

Ocasio-Cortez tweeted, apparently in response, that she would never apologize:

DHS ripped 1000s of children from their parents & put them in cages w inhumane conditions.

I will never apologize for calling these camps what they are.

If that makes you uncomfortable, fight the camps – not the nomenclature. https://t.co/eJpJWeYiot

Read the rest at Breitbart News