Cher: ‘The Planet Is Breathing Easier Because We’ve Stopped Assaulting It’

There is another scripture that describes this Jezebel also.

2nd Timothy 3:6-7 “For of this sort are they which creep into houses, and lead captive silly women laden with sins, led away with divers lusts, 7 Ever learning, and never able to come to the knowledge of the truth.”

See Silly Women and the Feminist Movement as this bimbo is one of them!

The🌍Is Breathing Easier Because We’ve Stopped Assaulting It.Look at Statistics. 🌎Has Powers Of Regeneration, & Could 4give Us If We MAKE CHANGES🕊.IF WE CONTINUE 2 DO NOTHING,THE 🌏WILL DO WHAT ”WE” DO 2 AN ENEMY,🔥DESTROY IT🌪🌊.
Pandemic Could Be a 2nd Chance 2 Save Our 🌎 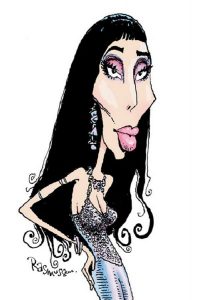 She also warned that humans need to change the way we treat the earth or else risk our own destruction through natural disasters.

“[The planet] has powers of regeneration, & could 4give us if we make changes,” Cher tweeted, adding an emoji of a windmill, presumably to indicate green energy. But if we don’t, Earth “will do what ‘we’ do 2 an enemy, destroy it.”

Cher isn’t the first entertainment figure to link the Wuhan coronavirus to environmental concerns. British actor Idris Elba suggested in a recent interview with Oprah Winfrey that the global pandemic is Earth’s response to damage inflicted by humanity, which he compared to an infection.

“Our world has been taking a kicking. We’ve damaged our world and, you know, it’s no surprise that our world is reacting to the human race,” the Luther star said.

Last month, Pope Francis told a reporter that the pandemic is nature’s way of telling humans to take better care of creation.

Cher recently has used the coronavirus pandemic to call President Trump a “murderer” and to sew fear that his administration is willing to sacrifice the lives of elderly people in order to re-start the economy. Source: Breitbart News