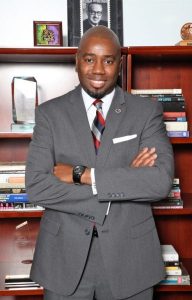 Why is it always these Clowns who are educated that are the worse of the Racists? It is Poor deceived Fools like this that keep the Plantation thriving!

Ecclesiastes 10:2 “A wise man’s heart is at his right hand; (Republican) but a fool’s heart at his left. (Democrat)“

FaithWire – A professor from the University of Louisville is accusing Republicans of trying to “pimp God” by “turning Her into a callous, homophobic, supremacist, gun-toting bigot to justify your nastiness.”

Ricky Jones, who teaches courses on pan-African studies, made the brash comments in a column published last week by the Courier Journal.

Ricky L. Jones: Why I have contempt for racist, lying, nasty Republicans https://t.co/uF0fJpmcAc

After referring to other racial minorities who disagree with his progressive politics as “lost souls,” Jones argued it is “monstrous” to suggest any of his comments are “racist.”

He also took umbrage with those opposed to abortion and support immigration reform along the southern border:

This is not the first time Jones has written callously about his political opponents. In late May, the professor wrote a column arguing those who support President Donald Trump or Kentucky’s Republican governor, Matt Bevin, prove the U.S. “is a nasty nation.”

“The nasty segment of this country still makes excuses for white supremacists — in the White House,” he wrote, referring to conservatives who have supported Trump. “It continues to glorify ideologies and iconography that reinforce the legitimacy of the Confederacy.”

As for his latest column, Jones ended by claiming Republicans would not want to debate him because he is “not Michelle Obama,” referring to the former first lady’s popular motto, “When they go low, we go high,” a pass at the sometimes offensive rhetoric invoked by the president.

“Like you, I fight dirty. When you go low, I’ll go LOWER!” the professor wrote. “And oh, by the way — that’s DR. Jones (not MR.) to YOU, nasty, nasty, naughty little Republicans. As Birdman said, put some ‘respeck’ on my name!” Source: Faith Wire

Here is this Clowns Info at the University