She is a Communist so she is all knowing just like the rest of the filthy Luciferian’s! I would guess that it is the Presidents fault she is an Ugly, Dirty Necked, Stringy Haired Old Whore too! 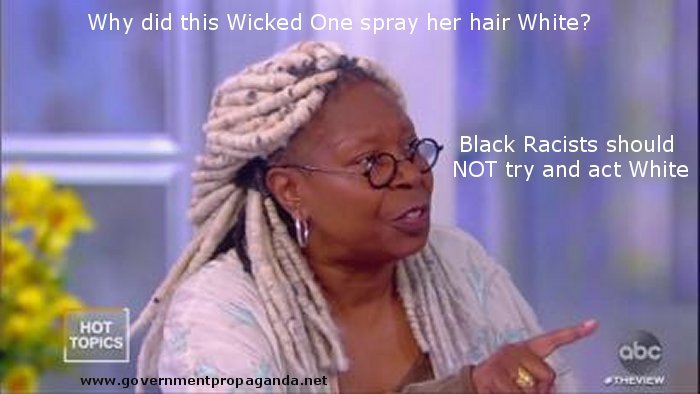 Proverbs 30:20 “Such is the way of an adulterous woman; she eateth, and wipeth her mouth, and saith, I have done no wickedness”

Jon Dougherty | TNS – As a government policy expert and immunologist, Whoopi Goldberg, co-host of the oft-mocked daytime gabfest “The View,” is a pretty okay comedienne.

As governors around the country place their citizens under orders of limited mobility and shutter businesses to prevent mass spread of COVID-19, even as federal and state health officials scramble to figure out how it operates, Goldberg graced us with her vast knowledge of dealing with pandemics by casting blame and aspersions at the least guilty party: President Donald Trump.

As The Blaze reported:

During the show’s Friday broadcast, Goldberg said that a lack of leadership all but guaranteed Americans would be under lock and key in their homes to wait out the COVID-19 pandemic.

Previously, the “expert” claimed this:

Whoopi Goldberg Claims Coronavirus Is NOT China’s Fault: ‘Mother Nature Did This To Us’

Whoopi Goldberg blamed the coronavirus pandemic on coming from “Mother Nature” and dismissed labeling it a product of China on Wednesday’s edition of The View.

In a clip, President Donald Trump said, “Well, China was putting out information which was false that our military gave this to them. That was false. Rather than having an argument, I said I have to call it where it came from. It did come from China. So I think it’s a very accurate term, but I didn’t appreciate the fact that China was saying our military gave it to them. Our military did not give it to anybody.”

Co-host Sunny Hostin said, “I was uncomfortable, and I remain uncomfortable, Whoopi, when they’re saying, you know, this is the Chinese virus, this is the Wuhan virus. I don’t think this is time to do that. I think when the swine flu in 1998 originated here in the United States, we didn’t hear people saying, this is the American swine flu. But then again, if it is true that China is saying that the American military gave it to the Chinese, then our president is someone that is a counterpuncher, and we know that, and so this was to be expected that he would counterpunch.”

She continued, confusingly, saying, “You know, people as we’ve seen, people start punching people, Asian folks out, you know, will attack. So we need to stop calling it or labeling it like it’s they did it to us. Mother Nature really did this to us.” Source: News Punch

Yes, she is a “Creature” along with those other Communist Bimbo’s that spew their Communist Democrat agenda!