Micah 7:17 “They shall lick the dust like a serpent, they shall move out of their holes like worms of the earth: they shall be afraid of the LORD our God, and shall fear because of thee.” 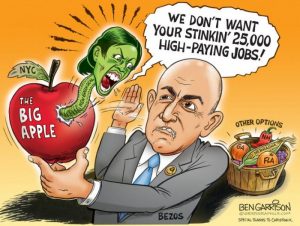 Yet her wormy outspokenness against Amazon bringing thousands of jobs to New York caused Bezos to lose his appetite for the Big Apple.

Yeah, I know we shouldn’t reduce her name down to an acronym similar to JFK or RFK. She doesn’t deserve such status, but her name is long so I will do it. AOC loves taxes. She couldn’t stand the fact that Bezos would get a sweetheart deal while paying little to tax-happy New York bureaucrats. I wonder if she considered how 25,000 newly employed and well-paid people would pay taxes, thus making up for it.

Regardless, ‘free stuff’ AOC is catching well-deserved flak for blowing the deal.

In her fantasy world, she did the right thing by thwarting a billionaire. In her mind, jobs can be created willy-nilly anyways and money does grow on trees. She also well deserves to be ignored, but she continues to garner millions of devotees, or as we like to call them, “useful idiots”.

Why is this? Because too many millennials now believe socialism is the way to go. This is why I’ve drawn so many anti-AOC cartoons. She’s the loud, bold, and ignorant face of socialism. Her militant ignorance must be opposed at every turn and I’m opposing her in cartoon form.

Socialists must not steal the Republic. Ben Garrison