Justice Leadership is Not Coming Clean 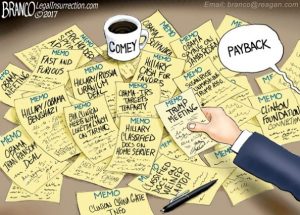 PJ Media – Despite misleading headlines, the inspector general’s report on the FBI’s investigation into Hillary Clinton’s emails shows a powerful law enforcement agency hobbled by bias and dishonesty. The press has seized on the IG’s statement that he “did not find documentary or testimonial evidence that improper considerations, including political bias, directly affected the specific investigative decisions we reviewed.” But that is simply Inspector Generalese for, “No one confessed or left a paper trail.”

In fact, several agents expressed a toxic hatred of Donald Trump and even, as one employee texted, a conviction that all Trump supporters were “poor to middle class, uneducated, lazy POS.” The entire investigation seems to have taken place under the assumption that Hillary would not be prosecuted and that investigators were just going through the motions as political kabuki. Even James Comey’s “insubordinate” decision to announce his conclusions in July of 2016 was taken to create “a sense of justice more broadly in the country—that things are fair not fixed.” Why would such a sense be needed if it weren’t for the fact that, in the words of agents’ texts, the whole investigation was clearly “a lot of work and bulls**t for a political exercise,” and “no one at DOJ is going to prosecute.” Even leaving pure political bias aside, the agents apparently knew that Hillary was going to win and felt it was best not to antagonize her by investigating too hard. As senior FBI official Lisa Page texted, “She might be our next president. The last thing you need [is] us going in there loaded for bear.”

Surely the most jarring revelation here is the text exchange between Page and her adulterous lover, top investigator Peter Strzok in which Page texts: “[Trump’s] never going to become president, right? Right?!” and Strzok responds, “No. No, he won’t. We’ll stop it.” This, as the IG writes, “is not only indicative of a biased state of mind but, even more seriously, implies a willingness to take official action to impact the presidential candidate’s electoral prospects.” No kidding.

And here’s the mind-boggling thing. The exchange is a revelation because, when congressional investigators finally managed to wrench these texts out of the clenched fist of the Justice Department, Strzok’s full response was redacted. It was only revealed in the IG’s report.

For what possible reason were these words blacked out other than an attempt at cover-up? There is no other plausible explanation.

And that cover-up seems to be continuing. Current Director Christopher Wray responded to the IG’s report at a press conference and promised there’d be consequences for bad behavior. But he also said, “nothing in this report impugns the integrity of our workforce as a whole or the FBI as an institution.” Like hell it doesn’t. What the report describes is a morally bankrupt clown show, and the fact that Wray won’t admit that means the show goes on. Read more at PJ Media