Check out this bit of news: Congresswoman Sheila Jackson Lee wears Pedophile Jewelry. She should have kept her mouth shut. I will bet in the near future this bimbos dark closet will spill open! 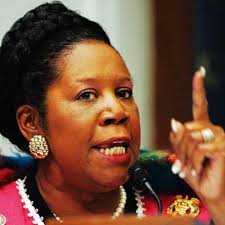 Several decades worth of coverage of Rep. Sheila Jackson Lee suggests she’s behaved badly on planes – and on automobiles – before this week’s incident.

The latest airplane drama came this week when a United Airlines passenger said she was booted from her first class seat to accommodate the Texas Democrat, who shot back by saying the only reason the woman complained was because Jackson Lee is black.

But previous reports show the House member, who was elected in 1994, has had a history of transportation drama, including berating flight attendants on first class flights and making her Congressional staff drive her one block, while waiting on her for hours and disrupting traffic.

She’s been documented calling her employees ‘you stupid motherf***er,’ while referring to herself as Congressional royalty.

‘You don’t understand. I am a queen, and I demand to be treated like a queen,’ she was quoted saying in 1998, three years into her nearly 23-year tenure on Capitol Hill.  Source: Daily Mail See more there