OK. so they try Russian Collusion and that is a lie. They roll out a Whore that Trump humped and that fizzles out. They pick off people around the President figuring he will back off going after the Clinton/Obama Criminal Cabal.

Well that did not work either and more is coming out about criminals in the FBI. So to take away from the Communist Fake News Outlets having to report on the news of the corruption and collusion in the Democrat camp, they roll out news of kids being kept in cages.

That is true. But guess what? It was during the Muslim, the  long-legged Mac Daddy, Barack Hussein Obama’s term as president! Now the fake news is pushing the images saying Trump is doing it and it is proved to be a lie!

Do people care? NOOOOOOOO, they run on emotions and don’t bother to check facts and instead listen to Ahab and Jezebel talking heads, who’s god is Lucifer!

It is all to DRAW AWAY peoples attention away for the real issue. There are Liars, Crooks and Pedophiles in the Government and Media! They are fighting for their lives and will stop at nothing to keep from being exposed and going to Jail! 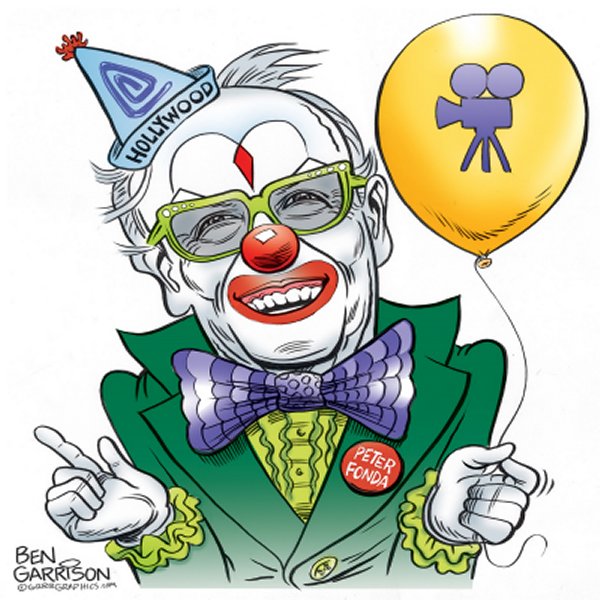 Paul Watson – Actor Peter Fonda was accused of encouraging people to target the children of Border Patrol agents and ICE employees after he tweeted, “we should find out what schools their children go to” and “scare the shit out of them.”

In an all caps rant, the younger brother of (Traitor) Jane Fonda tweeted, “WE SHOULD HACK THIS SYSTEM, GET THE ADDRESSES OF THE ICE AGENTS CBP AGENTS AND SURROUND THEIR HOMES IN PROTEST. WE SHOULD FIND OUT WHAT SCHOOLS THEIR CHILDREN GO TO AND SURROUND THE SCHOOLS IN PROTEST. THESE AGENTS ARE DOING THIS CUZ THEY WANT TO DO IT. THEY LIKE DOING THIS. FUCK.”

He followed up with another tweet in which he urged his 46,000 followers to “scare the shit out of them” and “make their children worry now”.

Fonda’s tweets were a backlash to the enforcement of a policy which dictates that children are separated from their illegal alien parents and held in child detention centers.

Many respondents to the tweets expressed their support for Fonda, although others said children shouldn’t be targeted.

“We don’t go after kids, any kids, ever,” tweeted one.

We don't go after kids, any kids, ever.

However, another user responded, “I would normally emphatically and categorically agree with this but the high road does not seem to be working out.”

In another tweet, Fonda raged, “WE SHOULD RIP BARRON TRUMP FROM HIS MOTHER’S ARMS AND PUT HIM IN A CAGE WITH PEDOPHILES AND SEE IF MOTHER WILL WILL STAND UP AGAINST THE GIANT ASSHOLE SHE IS MARRIED TO.”

Meanwhile, members of far-left group Antifa, which is listed as a domestic terror organization by the DHS, are also inciting attacks against ICE agents.

One Twitter user called Sam Lavigne downloaded personal information from ICE employees listed on LinkedIn and tweeted it out.

“The Twitter account “nebraska antifa” sent out a tweet to its followers on Tuesday that linked to the personal information of ICE officers compiled from information found on LinkedIn,” reports the Daily Caller.

Things @iamfonda has encouraged in the last 24 hours;

– Showing up at schools to "scare the shit out of" children of Border Patrol agents.
– Putting Barron Trump "in a cage with pedophiles".
– Hacking a government database.

This is gonna be an interesting test of Twitter's TOS.