The North Korean general saluted Trump first, which is a sign of deference and respect!

All of the Ass Clowns Leftists Ignored their Muslim god Obama Bowing down to the Saudi King and Japanese Emperor. 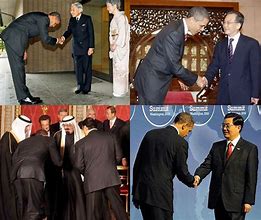 Paul Watson – Leftists are claiming that President Trump committed treason and honored a murderous regime by saluting a North Korean general, but were not so irate when Barack Obama bowed and groveled to the Saudi King.

While this exchange was nothing more than somewhat awkward, many on the left reacted as if Trump had sold his soul to the devil.

CNN described the incident as “an extraordinary display of respect from a US president to a top officer of a hostile regime.”

“Let me get this straight. It’s patriotic to salute a North Korean general who’s part of a brutal dictatorial regime that murders its people and aims nuclear missiles at America, but not patriotic to kneel during the national anthem to protest police brutality in America,” remarked Robert Reich.

Let me get this straight. It's patriotic to salute a North Korean general who's part of a brutal dictatorial regime that murders its people and aims nuclear missiles at America, but not patriotic to kneel during the national anthem to protest police brutality in America. pic.twitter.com/T313DHKG8C

As White House press secretary Sarah Sanders later explained, “It’s a common courtesy, when a military official from another government salutes, that you return” the salute.

Indeed, as numerous former military members pointed out, the North Korean general saluted Trump first, which is a sign of deference and respect because military protocol in both the U.S. and North Korea states that the lower ranking individual always initiates the salute, which is then mirrored by their superior.

In other words, Trump was displaying his superiority to North Korea.

The same can’t be said for Barack Obama, who in April 2009 bowed and stooped to show deference to King Abdullah of Saudi Arabia, a country with a human rights record on a par with North Korea.

In fact, Obama bowed so low that it was a comical display of inferiority. Unlike in Trump’s case, the Saudi King did not mirror Obama’s behavior, he merely nodded and looked somewhat bemused.

Obama repeated the same stunt when he bowed at the feet of Japan’s Emperor Akihito later that same year. In Japan, such a low bow is seen as a sign of extreme deference.

In both cases, leftists ignored the charge that Obama, as President of the United States, should not be displaying such inferiority to foreign nations and instead insisted that he was just being “diplomatic”.

As with everything, it doesn’t matter what Trump does, the left will find any way imaginable to feed it into their rampant Trump Derangement Syndrome.