And for that reason, He gets an Epitome of an Ass Clown Award! 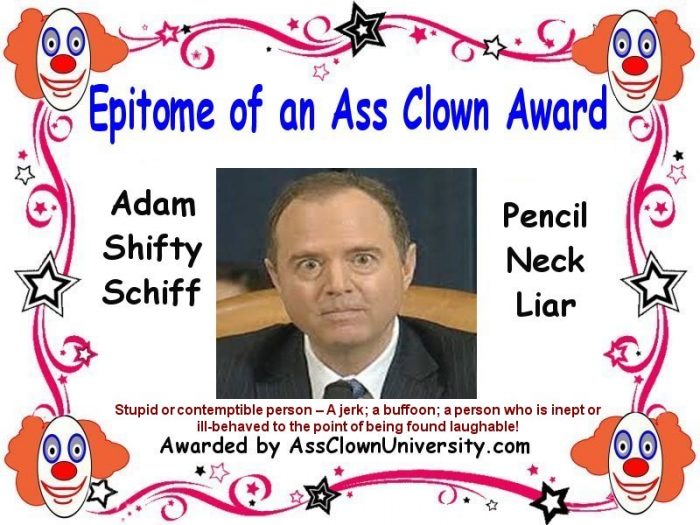 In an MSNBC interview on Saturday, Schiff, who led the House Democrats’ impeachment effort against Trump earlier this year, said Trump’s “incompetence” was responsible for the over 50,000 American deaths from the Wuhan coronavirus.

“Well there’s one thing that really I have to say haunts me from the trial and it was before that snippet that you showed where we knew we had to answer the question to the Senators,” Schiff told host Chris Hayes.

“Okay, essentially, House managers, you’ve proved him guilty, does he really need to be removed after all? We have an election in nine months. How much damage could he really do? And we posed that question to the Senate and we answered it by saying that he could do an awful lot of damage.”

“But frankly, Chris, I don’t think we had any idea how much damage he would go on to do in the months ahead. There are 50,000 Americans now who are dead, in significant part because of his incompetence, because of his inability to think beyond himself and put the country first,” Schiff continued.

“I don’t think we would have ever anticipated that his brand of narcissism and his brand of incompetence, sometimes his brand of malevolence would be so fatal to the American people.”

Notably, Schiff and House Democrats were busy trying to overthrow Trump in January while he was already responding to the coronavirus by shutting travel from China.

“The irony here is that Democrats and their relentless impeachment/removal efforts indeed distracted from Trump and Congress being able to more effectively combat the virus in the early days,” Red State reported.

“Not only that, but if Trump HAD been removed from office, Mike Pence would then be President and would be in charge of things. But Pence is the head of the White House coronavirus task force, so he already is in charge of the response effort.”

Owen Shroyer breaks down how Adam Schiff intended to hold U.S. Intel meetings on Zoom, after news had already broke on the major security issues with the platform and ties to China.