NO, they must win to advance the Communist/Socialist Agenda. With these Clowns in power the Humanity is in Jeopardy! Just look at Venezuela and other “Shit Holes” where they are in Charge! 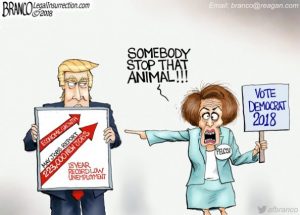 InfoWars – Democrats must win the midterms for “civilization” to have a future, says House Minority Leader Nancy Pelosi (D-Calif.).

Pelosi warned Democrats not to get complacent, and that a so-called “blue wave” can only take place when all the separate “droplets” come together to vote in the midterms.

“People say, ‘Is it a wave? Is it a tsunami?’ Well, it’s a lot of droplets that make up a wave or a tsunami,” Pelosi said.

“I don’t want people to think that there’s a wave coming so that they don’t have to work very hard in every single district,” she added.

At one point in the interview, Pelosi even claimed President Trump stole the “Drain the Swamp” slogan from the Democrats!

“That was ours. [Trump] stole it from us. ‘End the culture of cronyism, incompetence and corruption.’ That was our thing,” she said.

It’s worth noting the California Democrat was interviewed in May, before the left blew their collective tops over reports of Trump’s zero tolerance policy at the southern border and Justice Anthony Kennedy’s retirement announcement, highlighting that Democrats had already been gearing up to use hyperbolic rhetoric against Trump and his supporters ahead of the midterms.