This Black, Cowgirl wanna-be Bimbo picked a fight, is getting her ASS kicked, and now is whining like a brat who just had her candy taken away!

Her Ass Clown actions win her a spot among her cohorts. Look at the pic of her. Bet she does not even don a costume for Halloween! 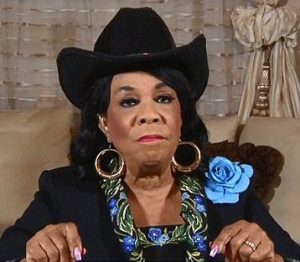 Congresswoman Frederica Wilson says John Kelly lied about her behavior at the dedication of an FBI building in her state and made a ‘racist’ charge against her in the process.

Wilson says she wasn’t a Member of Congress when the money for the building was secured, so she couldn’t have ‘bragged’ about bringing home the bacon like Kelly said she did.

‘You know, I feel sorry for Gen. Kelly. He has the sympathy for the loss of his son. But he can’t just go on TV and lie on me,’ Wilson said Friday on CNN.

The Florida Democrat also accused Kelly of using a ‘racist’ epithet against her during a White House news conference on Thursday afternoon, where he compared her to an ’empty barrel.’ Source: Daily Mail

The Bimbo is empty headed and is following the lead of fellow Black Bimbos, Mad Maxine Waters, Shelia Jackson Lee, Whoopie Goldberg and many others.

This all started when she accused President Trump of making an “insensitive” remark to the soldier’s widow. Read the story here.

Let’s see if she is a LIAR about the call made to the widow of U.S. Army Special Operations Command shows Sgt. La David Johnson. Listen to the audio the widow released of her and the President at the Daily Caller.