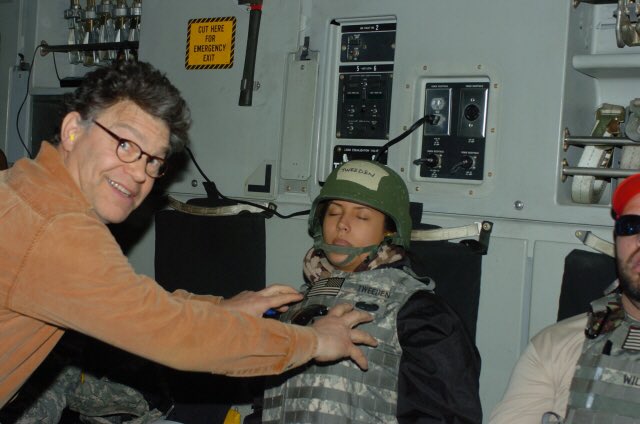 Senator Al Franken Kissed and Groped Me Without My Consent, And There’s Nothing Funny About It

FLASHBACK AL FRANKEN: ‘I just don’t like homosexuals. I was glad when that homosexual got killed’

Senator Al Franken, who is now mired in a sex abuse scandal after a picture emerged of him groping a sleeping woman’s breasts, once lectured conservatives on ‘respecting women’ and was called a “ feminist ally”.

TV host and sports broadcaster Leeann Tweeden accused Franken of groping her while she slept during a December 2006 USO tour to entertain the U.S. military, and provided photo evidence to prove it.

“I felt violated all over again. Embarrassed. Belittled. Humiliated,” wrote Tweeden. “How dare anyone grab my breasts like this and think it’s funny?”

During a separate incident, Tweeden said Franken tried to kiss her as part of a rehearsal for a skit and “aggressively stuck his tongue” in her mouth.

Years after the abuse, Franken was busy on Twitter lecturing Republicans about how they needed to “respect women”.

“The GOP is showing that they don’t respect women’s freedom,” he tweeted back in January.

But with continued attacks on women's repro rights and efforts to defund @PPFA, the GOP is showing that they don't respect women's freedom.

In another tweet, Franken decried the “sexual harassment” of women.

Well, this is awkward…. pic.twitter.com/askqUZmIrT

In another tweet endorsing Hillary Clinton’s presidential campaign, Franken labeled Hillary “a progressive voice that will fight back against attacks on women’s rights.”

@HillaryClinton is a progressive voice that will fight back against attacks on women's rights, and #ImWithHer. pic.twitter.com/IFumzEmhMC

A search of Franken’s Twitter history shows he has repeatedly invoked his advocacy for women as a political tool.

In another instance, a prominent feminist writer said, “Franken has shown himself to be a genuine feminist ally,” due to his support for abortion and other causes.

"Franken has shown himself to be a genuine feminist ally." 🤔 pic.twitter.com/SOycF686YN

Franken’s case yet again highlights the extraordinary amount of “male feminists” who strongly virtue signal about how much they care about women while sexually harassing them behind the scenes.

Now there are rumors circulating of a second victim as Franken is exposed as yet another flagrant hypocrite.