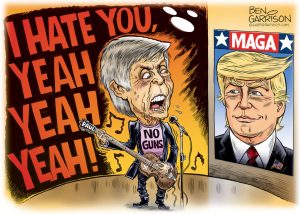 It’s his first number one album in 36 years. Why would an old fossil like McCartney still be recording songs and how on Earth could his new album possibly be a hit? That’s what I thought when I first heard about it.

I found out why. The 76 year-old mop top has Trump Derangement Syndrome. He’s an outspoken purveyor of ‘climate change,’ so he wrote a song on the subject in which he compares President Trump to mad captain piloting a boat toward an iceberg.

“People who deny climate change…I just think it’s the most stupid thing ever,” said Sir Paul in a stupid manner. Climate change ‘deniers’ are constantly smeared with insulting names by the left, so this comes as no surprise. McCartney’s great wealth may have helped buy him love, but he can’t buy intelligence.

I’m not denying that the climate doesn’t change, but I suspect the sun has far more influence over it than human beings. What’s stupid is agreeing to the Paris Accord, which would have led to economic shutdown in America. This is what Obama wanted. Wisely, Trump walked away from that bad deal and embraced clean-burning coal. Regardless, Sir Paul still wants everyone to pay a carbon tax. Who cares if the rabble might possibly lose their jobs and get poorer?

McCartney is out to ‘save the planet.’ I should say his planet. After all, he’s now a ’sir’ and part of the ‘Big Club’ that George Carlin told us about. Like others in his rich and powerful strata, Sir Paul enjoys a luxurious lifestyle that includes private jets, yachts and mansions that presumably consume large amounts of fuel. McCartney’s carbon footprint must be enormous, maybe even bigger than his fellow climate change huckster Al Gore. The Big Club owns most of the important land and large corporations as well as government. They own the Earth. It’s theirs and they don’t want the riffraff currently cluttering it up to prosper.

They want people to be poor. Poor folk are too busy spending all their time just trying to find shelter and put food on the table. The poor are easier to control through government handouts and dependence. In the end, the poor are also easier to exterminate.

Paul McCartney came from a middle class background and was a key member of the Beatles. They took the world by storm in the mid 1960s and led a counterculture movement by 1967. “Sergeant Pepper” was emblematic of the hippie era. It contained psychedelic songs with surrealistic lyrics. While perhaps not as rebellious as some rock bands of that era, The Beatles were definitely part of the anti-establishment hippie movement.

Sir Paul is now the very face of the establishment. The deep state globalist swamp establishment, that is. He rubs shoulders with royalty, movie stars, fellow billionaires, and authoritarian oligarchs. (He also revealed that he rubbed other things with his buddies at Lennon’s place long ago, but I won’t get into that—too disgusting). Oh—and of course he’s good friends with Hillary Clinton! He wants us all to be good little globalists. We need to downsize, stop eating meat, respect our lefty leaders and give up our guns.

I’m sick of hearing about the Beatles and about McCartney in particular. He has won a golden ticket to ride. It’s time for him to ride off into the sunset.

In other News about this Satanist:

The legendary former Beatle Opens a New Window. was mourning Linda — who died in 1998 — when he felt she came back to visit him.

“When you are grieving like that, you see little things, and you know you’re reading into it, but you allow yourself to read into it,” Paul said.

“I was in the country and I saw a white squirrel. It was Linda, come back to give me a sign.

“Obviously, I have no proof it was her — but it was good for me to think that!”

In unrelated news, the rock legend also revealed he once got so high on a psychedelic drug Opens a New Window. in the ’60s that he saw God. Source: National Enquirer