First a Flashback: Ole Georgie Boy when he was President! Please reread the definition of an Ass Clown at the top of this page and let it sink in for a moment! 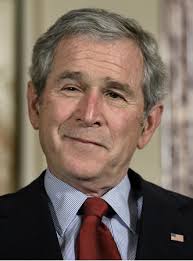 Chris Menahan Information Liberation – George Bush came out of retirement Thursday to “indirectly decry Trumpism” and label all those opposed to open borders globalism as bigots, nativists and white supremacists.

While Bush was fine staying silent throughout Obama’s hyper-divisive eight years, he gave a speech attacking Trump one year ago during the election while pushing his 1 percenter (poll wise) brother Jeb. It had zero effect on the polls and Jeb dropped out of the race shortly thereafter. Bush’s father George H.W. Bush told Democrat Kennedy Townsend he was voting for Hillary Clinton.

He has opened that fool mouth because the Bush Clan is getting scared. They know Trump has the goods on them but ole George, like Hillary can’t go away and keep his mouth shut!